You are one of the founding members of the Hilliard Ensemble who were the first to introduce Pärt’s vocal music to the Western world and have thus entered into new territories. Pärt was rather unknown at that time. Wasn’t that a kind of risk? What was important or difficult about it?

Hillier: I remember very clearly the first impact on me of seeing notated examples of Arvo’s music in an article by Susan Bradshaw in the British magazine Contact. I had an immediate sense of rapport, both with the music on the page and with its performance implications … it seemed like something I already knew, even though I had never seen it before! I ordered a copy of the LP “Tabula Rasa” (which had just then been released) and when it arrived I listened through with a complete sense of identification with what I was hearing. I got in touch with UE asking to see some scores. This led to my first meeting with Arvo (at London’s Victoria station!) so that I could ask all sorts of questions about how we might perform the music. Then I made arrangements with the BBC for us to record a whole program of the music.

During this process it never occurred to me for a moment that there was any risk involved. And once we started performing the music in concerts the reaction was so spontaneously favourable that we just continued doing more and more. When I finally woke up to the fact that not everybody shared my views, well, it was too late: as they say in the USA, we were on a roll.

I should say too that as a musical style it seemed to come naturally to us, being so close in many ways to the medieval and renaissance music that was our core repertoire. We sang in the same way (more or less) for both kinds of music.

To appreciate the importance of creative silence …

Since then Pärt has been an integral part of the concert programs when you conduct vocal groups and choirs. How do you reach out to the members of the choirs the nature of Pärt’s music to get them “on board”?

Hillier: Most of the choirs and vocal ensembles I work with are already interested in the music, so they have already invested something of themselves in the process. Even so, there are many technical aspects and indeed mental attitudes towards the music that need either to be cultivated or at least refined. The notes are easy enough, but that doesn’t make the music easy to perform well – and this is equally true of instrumentalists as of singers. I don’t have a “program” for this: each group is different in its history and local culture, and one reacts accordingly. But I do try to rehearse in such a way that the singers and players come to appreciate the importance of creative silence and of how to bring that about. Also I want them to feel the specific gravity of each note (which actually means the two-note simultaneities that are the essence of tintinnabuli style,) and to do this I sometimes rehearse the music very slowly before bringing it up to performance tempo. On the other hand the music often needs to dance as well – whether it’s a slow dance or a quick one – so that has to be actively prepared as well. Overall, it’s a matter of developing a style of phrasing that incorporates the silences so that the musical energy continues to flow even when the sound itself falls away. In fact it is this aspect of the music which, I believe, led Arvo to describe it as tintinnabuli.

Are there any hints or warnings that you want to share with a choir, how to approach the music of Pärt? What’s different with Pärt’s music?

Hillier: Tuning is very important so that the music’s “Klang” remains intact. Also the tintinnabulating parts (the ones with ‘arpeggios’) need practice so that they too can be phrased correctly – by which I mean that the highest notes should often not be the strongest: one needs to phrase according to the text. A complication, which every conductor needs to attend to, is that Pärt’s barring often reflects the words as individual elements, but does not reflect the phrasing in any traditional way. In other words, the main conducting beats often fall on unstressed syllables and vice versa. If you are accustomed to singing renaissance music or plainchant, then this may not be such a problem, but it certainly can create difficulties.

One particular example of this is the Berlin Mass, and here it is perhaps the instrumentalists who have the hardest time, with no words in front of them to guide the shaping of the music. Again this is an issue for the conductor to attend to.

Many of your CD recordings and live concerts have been made in close cooperation with Arvo Pärt. Is there an event or moment that you particularly remember?

Hillier: The all-night editing session on Passio with Arvo, Manfred [Eicher] and the sound engineer Peter Länger. This was somewhere in a suburb of Stuttgart, if my memory is correct. Another evocative memory is the sound of high winds around the large church in north London where we recorded that work: somehow this became part of the atmosphere that one can feel in that recording. Mostly I remember the places where we recorded and the prevailing mood of each project, but not details of the actual sessions.

A unique blend of gravity and lightness.

In 1997 you have released the first book on Arvo Pärt that offered a survey on his life and also a stylistic survey of his work up to then. Ever since a lot of things have happened and many works have been composed. Do you consider an update of this book?

Hillier: It has crossed my mind of course, but so far I have been too busy with other things. Right now I'm in the middle of a book – a history of singing groups – which I need to finish! And anyway, I was only able to complete my original Pärt book because I had a professorship at U.C. Davis that afforded me the time and resources to work on it consistently. Now that I’m a freelance musician again it’s not so easy.

I will add this however: the one aspect of the music which I felt warranted more discussion was the extent and nature of its spiritual basis in the Russian Orthodox religion. I offered a few thoughts on this in my book, but I’m not qualified to go further in that particular direction. However, someone else has just accomplished this very thing and I warmly recommend it: I’m referring to Peter Bouteneff’s “Arvo Pärt: Out of Silence”, just published this year by St Vladimir’s Seminary Press in New York. It’s very clear and readable, and yet it says a lot.

Which are the works that have moved you the most?

I Am the True Vine

Hillier: First there has to be the Passio, though ideally this is a work to perform as a special event, not too often: it’s a performance piece, and I try to be sparing of rehearsal. Then there’s the Miserere – of the larger works this is the one with which I was most closely involved in the initial preparation, and I remember the first performances with great affection. After that it becomes impossible to choose: I recently presented a Pärt “retrospective” with Theatre of Voices (as an octet) in which we performed at least one work from each decade of Arvo’s composing career – from Solfeggio (1964) through to Virgencita (2012) – already one of my favourites among the smaller pieces. One important rediscovery for me through doing this program was I Am the True Vine. I recorded this work about twenty years ago, but since then, for no particular reason, it dropped out of my repertoire. It was good to be reminded of just how lovely it is, with a unique blend of gravity and lightness.

Finally I must not forget to add some of the instrumental works, especially Fratres, Tabula Rasa and Spiegel im Spiegel: these were among the first Pärt works I heard and they each remain strong favourites, but for me Fratres is one of the most important pieces of all.

Working with the music of Pärt has it had an influence on your relationship to music or on the way you interpret music?

Hillier: Yes, but it works in two directions. The way I interpret music has also had an effect on the way I work with Pärt's music. Everything contributes to one's work as a performer.

Speaking of influence and thus perhaps of connections between different composers, for me one of the closest composers to Arvo is John Cage, especially the way he uses silence and single notes; also of course, the prepared piano. I think Arvo once told me that he'd not heard Cage's music (as a young man) but he had read about it and that was already enough to have acted upon him in some way as a liberating influence. Another is Luigi Nono, whom Arvo actually met when he (Nono) was visiting the Soviet Union. Whether there was influence of some kind I cannot say, but in Nono's music one often hears single notes 'played beautifully' – which reminds me of a very similar ideal that Arvo has quoted. ('It is enough if one note is played beautifully.')

More generally – about the influence of Pärt on other composers – I get sent quite a lot of music by composers who have clearly been influenced by Pärt’s example. Unfortunately, when you have a Pärt there’s less need for other music of the same ilk. I am not much drawn towards so-called “holy minimalism”. I perform Pärt because it’s wonderful music. But otherwise I like composers who do other things, their own things, as well as possible. 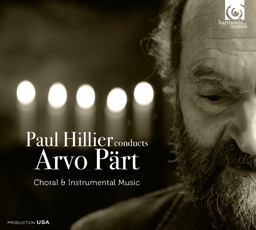 For the occasion of Pärt’s birthday, Harmonia Mundi USA will publish a CD box that contains three successful CDs of the past years in October.