Enzo Restagno, the Italian musicologist, conversed extensively with Arvo Pärt and his wife Nora, in the course of which Pärt spoke very candidly about his roots and his life in Soviet Estonia, his emigration, his artistic odyssey and his world view. The entire conversation was published in book form in 2010 (Pärt im Gespräch [Interviews With Arvo Pärt]) by Universal Edition.

Your involvement with music goes back to when you were very young – you were only seven. Why and when did you resolve to become a musician?

Arvo Pärt: I can’t say. You are who you are, but no one knows who they will become – and least of all a child. I can certainly not claim that I had the feeling back then that I wanted to become a musician. But I do believe a vague consciousness of that gradually formed during my first attempts at composition. Sometimes I imagine that I already had the premonition back then that I could compose and produce something similar to what I heard on the radio or at concerts. But the truth is that I matured very late and that I was not yet able to find the path which should have led me to what I was seeking. My severe longing to find that path expressed itself later on in my far too enthusiastic commitment to twelve-tone music. After that, I drew back, because I was seeking something else. It was one of several attempts to find my way and my world.

In 1964 you wrote pieces using the collage technique. These compositions are clear evidence of your intention to break with your musical past.

Arvo Pärt: The Collages are a kind of transplantation; when you feel like you have lost your skin, you try to take strips of skin from anywhere you can find them and use them to cover yourself. With time, those strips modify and become a new skin. I wasn’t sure where the ­Collages trial would have led me – but in any case I had the impression that I had a living organism in my hands, a living substance I had not found during the twelve-tone music period. Yet it is not possible to carry on indefinitely with the transplantation technique.

This reached its limits in Credo. At that time, and in the condition I was in, despite being finished once and for all with the numbers in twelve-tone music, I was not able to write a melodic line without numbers. That was not the case with Gregorian chant; its lines had soul. Today I am more tolerant regarding that style as well. It is not the twelve tone's fault “per se“, it all depends on the composer and on the way he uses those twelve tones. It’s a question of whether he wishes to produce honey or poison – Webern, for instance, never produced poison.

The critiques of my works were good in the West.

Your Credo for piano, chorus and orchestra, written in 1968, is one of your most important compositions; its premiere was a scandalous success. But what I find so extraordinary about it is that the outrage was provoked by the work’s middle section, where the dodecaphonic technique is used serially, culminating in a violent mimesis of Chaos.

Arvo Pärt: At the time – and perhaps even somewhat earlier – it seemed to me that I was in the process of discovering what I would call a new beginning. The most important thing for me when I was confronting the new work was the text – the words I wanted to set; the Gospel passage most distinctly expressing the teaching of Jesus. It is the place where he responds to the Old Testament “oculum pro oculo, dentem pro dente” [an eye for an eye, a tooth for a tooth] by saying, “Autem ego vobis dico: non esse resistendum injuriae” [But I say unto you, you shall not resist evildoing]. I literally broke that sentence down into notes and numbers so that every word corresponded to the orchestral resources I used.

I structured the dodecaphonic framework by placing fifths – the purest and most innocuous interval – next to each other, and so on and so forth until the orchestral expansion was as great as possible. The juxtaposition of the fifths creates an ever-denser texture, a true saturation of the sounds, to imitate chaos and destruction. Only then come Jesus’ words, “But I say unto you … “ and everything gradually disintegrates into its parts. It is like the collapse of the Soviet regime; someone could have interpreted it that way and felt frightened.

You said that your emigration to Western Europe prompted you to decide to leave Tallinn for good. Do you recall how you reached that decision?

Arvo Pärt: A great many things were happening at that time – but the decisive factor was the government’s attitude toward me. They let me know that they would find nothing amiss if my wife and I left the country. I had practically no chance anymore of surviving as a composer, since the functionaries – on whom my life depended – were behaving with increasing animosity toward me. In their view, the performances of my works abroad had become too frequent. Yet it would have been deemed a scandal if the composer were not in attendance at a world premiere, so they were obliged to let me go. The critiques of my works were good in the West, but that just made things worse. The situation soon became unbearable for [Nora] and me.

Nora Pärt: A leading member of the Central Committee visited us at home in autumn 1979; he recommended that we leave the country. It was supposed to look like a voluntary decision – but in fact it was an expulsion which, at that time, was irreversible; we boarded the train to Vienna shortly afterwards.

Perhaps it is that people who follow my work with interest hope to find something in it. Or perhaps they are people who, like me, are seeking something and feel they are moving in the same direction when they hear my music.

You used the dodecaphonic method until 1968, although not very strictly. Every composition reflects the typical unease of those who have not yet found an independent language as a solution to their problems. But after those fitful attempts there came a long period of quiet, from which an original, personal perspective finally emerged.

Arvo Pärt: I was convinced at that time that I simply could not go on with the means available; there was not enough material, and so I simply stopped writing music. I would have liked to come into contact with something living, simple and not destructive. I just wanted a simple musical line, internally alive and breathing, the way it had existed in the song of distant epochs, and still does in today’s folk music; an absolute monody, a naked voice from which everything ensues. I wanted to learn how to lead the melody, although I had no idea how that worked. I had only one book on Gregorian chant, a “liber usualis”, which I received from a church in Tallinn. I began to sing and play those melodies with the same feeling I would have if I were having a blood transfusion – and somehow I was successful in connecting with that music. But I never used that proximity as a quotation – apart from one piece (Statuit ei Dominus) which I wrote for the cathedral in Bologna.

Nora Pärt: What he wanted to do was to develop a new way of hearing, so he avoided listening to any other type of music during that time. Arvo wanted to find his way into that mysterious source and let the sounds emanate freely. He laboured away at reading the Psalms – and right after that, he tried to write a melodic line with no caesura, no “control,” as if he were blind, in order to better be able to transform the nuances of the text directly into music.

Arvo Pärt: I returned to the rules with the Tintinnabuli style. Basically, the concept was one comparable to what normally happens when one is learning to play the piano; the left hand keeps playing the same chord while the right hand develops the melody. In my case there are a melody and three pitches – but every note of the melody is associated with one of the three pitches in accordance with very precise rules – and vice-versa, of course. Obviously, unexpected dissonances ensue, but there is a logic in the uppermost melody, just as there is one in the three accompanying pitches, even if it is rather concealed.

Cantus in Memory of Benjamin Britten

Please tell me more about Cantus. I was truly moved by Steve Reich’s enthusiasm when he told me about it on several occasions. For this reason, my first question would be, “Why ‘In Memory of Benjamin Britten?’”

Arvo Pärt: I had already completed the drafts for the piece when I happened to hear of Britten’s death on the radio. Some of his pieces were broadcast for that occasion; their tenderness and a certain transparency moved my wife and me deeply – they evoked the atmosphere of the ballades by Guillaume de Machaut. That was the moment when I decided to finish my piece and dedicate it to Britten. I had wished to meet him and get to know him for a long time – but the news dashed that idea. Cantus is simply a prolation or mensural canon consisting of one scale. The five different entries are extended at each repetition until all the voices fall together “at home” like in a cadence.

Yet the work’s mere structure, as you describe it, does not explain the audience’s enthusiasm at every performance.

Arvo Pärt: I think it is due to the clarity and simplicity of the construction, the absolutely clear order, which we all perceive, consciously or not. In my opinion, it is oscilla­tions which entail a type of resonance. That is music’s secret – the secret of every kind of music. In my opinion, one of the key concepts of your music lies in the existence of these simultaneous tempi. Sometimes, a moment in your music expands as if it were unhinging the temporal element.

Nora Pärt: I could name several examples of that. The last chord of Cantus refuses to end; it stays there, without increasing or diminishing. It is something achieved and which no one wants to give up. The substance of the entire work strives toward that point. Once the cadential plateau is reached, the chord refuses to end. The same thing occurs in Tabula rasa at the end of Part One; again, that final chord appears, wishing to prolong itself into Infinity.

How do you explain the success of your music?

Arvo Pärt: Perhaps it is that people who follow my work with interest hope to find something in it. Or perhaps they are people who, like me, are seeking something and feel they are moving in the same direction when they hear my music. Also, there is the fact that I work with simple numbers which are agreeable to see and hear; I seek a common denominator. I strive toward a music which I could call universal, in which many dialects intermingle. 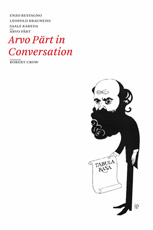 Nora Pärt: In any case, what counts most for Arvo is the will to reach music’s roots, to discover the core cell, as it were, and to be musically reborn with it. I think that that cell, that deep root can produce many different fruits – and many very different people see themselves reflected in them for that reason.

Arvo Pärt: I believe that we should accept the fact that people in our time feel there is a need to exhale, not just keep inhaling.

Musicologist Enzo Restagno was born in Turin in 1941. He and his promoter’s careful programming (e. g. “MiTo Settembre Musica”) have had a lasting influence on Italian musical life in recent decades.