“I went to nursery school every day until the end of secondary school!” Arvo Pärt says and pauses, staring slyly at his listener. Only after a few lengthy seconds more does he add: “My mother worked at a nursery school in Rakvere, and I always went to visit her after my lessons.” There, the future composer often sat at the piano and played or improvised for his little friends. Children’s stories and songs as well as their world of make-believe was a natural, everyday environment for Pärt. Even now, many decades later, he knows by heart a large number of nursery rhymes and silly ditties, and can pull them out of his sleeve at just the right moment. Arvo Pärt finds a common language with children with ease – just as children do with him.

Thus, it is not at all surprising that we find music written for children in particular at the beginning of Pärt’s path as a composer. He composed songs, piano pieces, and music for radio programmes, plays, and animated films for altogether nearly twenty years. Only a small portion of these – Five Children’s Songs for children’s choir and piano (1956–1960), Four Easy Dances for piano (1956–1959), and the cantata Our Garden for children’s choir and symphony orchestra (1959) – has been officially listed among his works, and are thus more widely known. Brought to life with the album “Songs from Childhood”, which covers the period 1956–1970, are ten additional songs, the sheet music for which sat on the shelves of the archives at the Estonian Theatre and Music Museum and the Arvo Pärt Centre until now.

“I suppose they did their tricks up on stage and I did mine at the piano.” 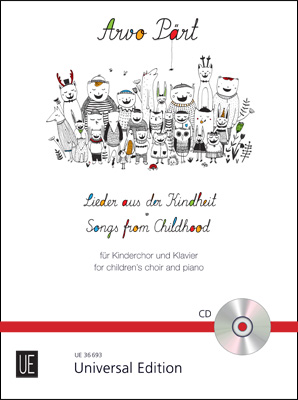 Pärt’s first job was also connected to children and youth. In the second half of the 1950s, as a student at the Tallinn School of Music and later the Tallinn Conservatory, he earned pocket money by accompanying on piano the theatre club of the Tallinn Palace of the Pioneers (now the Kullo hobby centre). Pärt came to the theatre at the invitation of Salme Lauren, who was then director of the theatre club and for whose translated, written, and staged plays Pärt composed a large amount of music in those years. Most of this music came about by way of direct improvisation, and never actually ended up as sheet music. “I suppose they did their tricks up on stage and I did mine at the piano,” the composer has later recalled. Among those pieces are Arvo Pärt’s earliest known works – composed more than half a century ago over the period 1956–1960, their exact dates unknown. The miniatures, which were hastily scribbled out at practices and only later given their more polished forms, possess the spontaneous, playful spirit amid which they were born. Simple, genuine, and sensitive, they contain something timeless that is comprehendible and familiar even for the children of today.

A large number of the tracks on Songs from Childhood indeed originate from music meant to accompany children’s plays. Thus, Firefly’s Song, Frogs, Ladybird’s Song, and Summer Waltz, as well as the beloved piano piece Butterflies were written for Lauren’s play Adventure in the Woods. The composer selected the first three songs for his 1960 cycle Tykes’ Songs, later titled Five Children’s Songs, which he dedicated to his mother.

The five songs also include The Doll Has No Name and I Am Already Big. Even many adults of today certainly remember from their own childhoods the opening words of I Am Already Big (which is probably Pärt’s most well-known children’s song). The song was written for the youngest section of the Estonian Radio children’s ensemble at the request of Kiira Kahn, then editor of children’s programmes at Estonian Radio. As Kahn recalls, the song was written completely spontaneously and using lines from a poem found by chance before a practice. Pärt, who worked as a sound director at Estonian Radio from 1958–1967, was also the piano accompanist for the children’s ensemble for a while, naturally often performing along with the children in the first radio recordings of his songs. As such, Songs from Childhood is a great bridge between child radio singers then and now, since the Estonian Radio children’s ensemble (then directed by Eda Neider) is the predecessor to the present-day Children’s Music Studio of Estonian Radio.

Pärt also wrote several songs and piano pieces for Erika Tatsch’s children’s play The Lost Picture Book. Taking the stage in the play (emerging from the pages of a book that fell out of Santa Claus’ sack and into the woods) are well-known fairy-tale figures, including Hansel and Gretel, Snow White and the seven dwarfs, the wicked witch, and many others. Until now, fairy-tale songs represented on the official list of Pärt’s works only included his piano pieces Puss in Boots and Little Red Riding Hood. This album adds to those with the solo song Sleeping Beauty and the choral pieces Where Are You, Father Christmas? and The Book. It is interesting to note that in the latter song, music written in the late 1950s meets text composed only in the autumn of 2014. Specifically, Leelo Tungal, one of Estonia’s most beloved children’s poets, wrote new lyrics for the play’s final song. Both the play The Lost Picture Book and Pärt’s music composed for it were published in the 1962 collection Christmas Selection I, and were afterwards frequently performed on stage. Performances were given primarily as a part of school and theatre club New Year and Christmas party programmes, but the songs were formerly unknown as independent pieces of music.

More recognisable as stand-alone songs are perhaps the winter tunes Santa Claus and Let the Snow Swish. Both were published in the 1962 collection of Estonian composers’ pieces titled Songs for New Year, and were also published repeatedly in school songbooks. 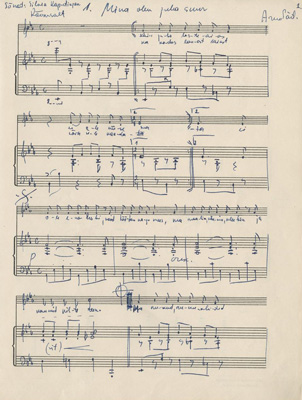 By the early 1960s, Arvo Pärt had become a recognised composer whose works (Necrology, his first symphony, Perpetuum mobile, and others) were played regularly in concert halls and on the radio. In addition to symphonic and other concert music, he actively composed film soundtracks during the sixties and the seventies, which included the music for nearly twenty puppet and animated films. One of his first jobs at the Tallinnfilm studio was writing the music for Heino Pars’ puppet-animation film The Little Motor-Scooter in 1962. The film’s main character is a brave little motor-scooter, who falls out of a truck’s cargo of toys and has to find the way to children on his own, wandering through forests and the city. Pärt wrote an imaginative audio layer for the film’s colourful scenes, which also includes one song. Eno Raud’s text was complemented with a couple of instructive verses penned by Leelo Tungal for this album, giving the song a new form – thus, the song The Little Motor-Scooter has begun its own life independent of the film for the very first time.

Alongside the nature-themed Operator Kõps tetralogy, the 1970 puppet-animation films Atom-Boy and Atom-Boy And the Thugs (directed by Elbert Tuganov at the Tallinnfilm studio) certainly feature some of Pärt’s most recognised music. The films – fairy tales of the technological age – are about the tiny atomboy Aatomik, who learns how to control his immense power and help people in doing so. There is also a fun story connected to Aatomik’s song in the film. Specifically, Els Himma, who was supposed to sing Aatomik’s parts, was unable to come to the studio on recording day, and so was substituted by Eri Klas – a famed conductor and Arvo Pärt’s good friend. However, viewers have no idea that anything changes, because the song is distorted in the film and played several octaves higher.

In the 1960s, Pärt was also a musical designer at the Estonian State Puppet Theatre, writing music for altogether seven productions. Interestingly, both Pärt’s first and last works for the Puppet Theatre have ended up on this album. The brisk Road to School is from Dagmar Normet’s children’s play Treasure Hunters, which featured characters hailing from different books and ages – such as Kiir and Toots from the classic Estonian novel Spring by Oskar Luts, Tom Sawyer, and others.

The album’s only instrumental piece, Mommy’s Kiss (initially titled In Front of the Curtains) comes from a well-known Elar Kuus' children’s play of the same name, which tells the story of a splendid bunny family. Mommy’s kiss is a powerful secret weapon for the bunny children – it makes them braver and protects them from all kinds of dangers. Arvo Pärt has said that this symbol contains a deeper meaning: “When a child leaves home in the morning, he or she always gets a mother’s kiss or a hug for the road. But actually, it is for their entire life – like a mother’s blessing.”

Mommy’s Kiss for piano as well as all the songs on the album are dedicated to Arvo Pärt’s mother.

The initiative to compile the album Songs from Childhood came from singer and conductor Kadri Hunt, who was looking for an opportunity to record Arvo Pärt’s children’s works with the Children’s Music Studio of Estonian Radio, as well as in order to include the music in the repertoires of Estonian youth and children’s choirs more widely. At her proposal, in early 2014 Pärt selected songs not only from his earlier-printed scores, but also from his manuscripts, and re-arranged the vocal parts.

A large portion of the music that you will hear on this album was born as one-part songs with piano accompaniment, and can be performed as such in the future, too. However, new and colourful instrumental arrangements of reductions and songs scattered throughout the sheet music for film soundtracks were made by composer Tauno Aints in collaboration with Arvo Pärt. All arrangements are also listed as backing tracks – foremost for the benefit of music teachers, as well as to give children the opportunity to practice with full accompaniment at home. At the same time, Arvo Pärt himself has said that Tauno Aints’ successful arrangements performed by talented interpreters are such a pleasure to listen to as independent music that they can be regarded as little instrumental pieces in themselves instead of simple singing accompaniments.

In the course of compiling this album, it became clear that Arvo Pärt’s pieces here have literally been childhood songs and stories for several generations in Estonia by way of theatre performances, animated films and school songbooks. They bring cheer not only to musical children of today, but have a special nostalgic value for many contemporary mothers and fathers, as well as those who are already grandmothers and grandfathers.

Consequently, it is not only an archive door that has been opened. This album leads us back to the world from which these songs originate – a child’s world full of playtime, freedom and courage, unexpected turns and limitless imagination. A record player can also be a time machine, and can take us on a journey back to our very own childhood.