You have often spoken about how you first came across Arvo Pärt’s music. Your first project together was “Tabula Rasa“, an album that wrote history. The music world was surprised not only by the presentation of a new composer, but also by the unusual choice of musicians. Keith Jarrett – a jazz legend at the latest since the recording of the Cologne concert – also played on the “Tabula Rasa” album. What prompted that idea?

Eicher: I met Arvo Pärt personally for the first time in the early 1980s. Our discussions with Arvo in Lockenhaus were guided by openness and a curious interest in the other person’s work. I was not surprised that Arvo was acquainted with the music of Steve Reich and Meredith Monk, for whom I worked as a producer. He was also familiar with Keith Jarrett‘s solo piano recordings. I took a piano recording by Keith Jarrett of music by Gurdjieff/De Hartmann, released by us the previous year on ECM, to our very first meeting. “Dolmen Music” by Meredith Monk was also in my bag. And by the end of this very first meeting, it was clear that we wanted to make a recording together.

Arvo Pärt is in a class of his own.

When we met the next time, in Vienna a few months later, we decided to ask Gidon and Keith if they would record Fratres for violin and piano together. After brief consideration, both Gidon and Keith agreed. There was certainly a little bit of risk involved because the two musicians hadn’t ever played together before, and they had seemingly pursued entirely different paths until then – but this was not completely true. Keith had played works by Bach and Bartók from an early age, and he was always very open-minded as regards New Music as well. Keith had also heard Gidon’s recordings for Philips of Bach’s sonatas and partitas.

How does recording with Arvo Pärt differ from your work with jazz musicians, for example?

Eicher: Arvo Pärt is in a class of his own. His music is unique. It spreads out, taking advantage of the space available. No – it looks for a space and opens it up as the specific location for its very own sound.

Your label ECM is renowned for its unique sound. I know that Arvo Pärt holds your ideas of sound in high esteem, and that ultimately all recordings of his music follow this particular sound concept. How would you describe this search for sound?

Eicher: The spaces – meaning the recording locations – are very important for this music. Arvo, the musicians and I think very carefully about them before we make a decision. I naturally always comply with the composer’s sound concept and the specifications in the score. And it is also natural that we at ECM choose music that is close to or even corresponds to our ideas; the decision is always based on the content.

Searching for a particular sound is also often very arduous until you manage to get the music to really resound. Coincidences play an important role quite often as well. In a good spatial situation, however, you can wait and see, and allow things to develop by themselves. It is not always good to predetermine too much beforehand. Being open to the development of a sound is a must. You have to have a feeling for the moment. Music is always different and can never be repeated. There is never a second time in music.

Not every recording situation is the same. Can you remember a special scenario with Arvo Pärt in which a difficult initial situation still produced a positive result?

Eicher: The recording situation for Passio in Saint Jude-on-the-Hill in London left a lasting impression. On the evening of the first day of recording there was a storm. We could hear the wind in the nave of the church as well. Luckily it was blowing in the right key. You can hear it on the recording if you listen carefully.

Arvo Pärt has sometimes described you as a “co-author” because your creative approach to his works is extremely important for the recordings. How would you describe this influence?

Eicher: Perhaps – no, not perhaps. I am a good and attentive listener. Listening to music with Arvo, to perceive its emergence or to determine the order for an album is a celebration time and again, to a certain extent a celebration of the moment.

Unless I am mistaken, all recordings of Arvo Pärt’s music – with two exceptions (Tabula Rasa, Symphony No. 4) – took place “in the studio”. That is astonishing. One of the biggest successes in recording history is Keith Jarrett’s Cologne concert, which you have already mentioned. Can this “live” concept be applied to Arvo Pärt as well?

Eicher: The majority of the recordings of Pärt’s music didn’t take place in the “studio”, but they were still recordings that were carefully produced with the composer always in attendance. For example, in St. Nicholas Church in Tallinn, in Lohja Kirkko in Finland, where we recorded the Te Deum when it was minus 30 degrees outside, or in the Mozartsaal in Stuttgart. Of course, we could also have done live recordings, but that sometimes has its own pitfalls and disadvantages. However, the recording of Tabula Rasa with Gidon Kremer, Tatjana Grindenko, Alfred Schnittke and the Lithuanian Chamber Orchestra with Saulius Sondeckis is a concert recording whose sound was processed slightly by us at a later stage in the studio. The Symphony No. 4 is also a concert recording.

Another success story that travelled around the world and triggered an artistic wave was your CD “Officium” with Jan Garbarek and the Hilliard Ensemble. Arvo Pärt once told me that – long before the success of “Officium” – you experimented with bringing artists together from different worlds to participate in projects. Which means Arvo Pärt also crossed paths with Garbarek? Were any recordings made back then which have yet to be revealed to the world?

Eicher: Arvo, Jan Garbarek and I met in the first Rainbow Studio in Oslo and made some recordings. It was more of an experimental session, without an actual goal in mind or a result for a finished recording. We tried different things, testing this and that. The recordings were documented – who knows what they will develop into...

He showed me how to hug a birch tree.

Kanon Pokajanen is Pärt‘s most substantial a cappella choral work – a penitential canon lasting 90 minutes. Your recording with the Estonian Philharmonic Chamber Choir conducted by Tönu Kaljuste is among the most impressive choral recordings ever made. Arvo Pärt wrote many choral works, but you have yet to tackle them. Is there a reason for this?

Eicher: We have recorded quite a lot of Arvo’s choral works. Kanon Pokajanen is the most extensive work so far.

Film is a medium that follows its own rules. You have repeatedly explored this creatively as well, and Pärt’s music is often used in films. What aspects make Pärt’s music predestined for films?

How would you describe your experiences with Pärt’s personality?

Eicher: He showed me how to hug a birch tree in the woods not far from Tallinn. Ever since then I have always kept a lookout for birch trees.

Working together with you as a producer is part of Arvo Pärt’s success. What is the real, original element of Pärt’s music?

Eicher: Clarity. What is more mysterious than clarity, as Paul Valéry would say. 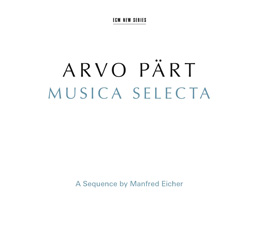 On the occasion of Arvo Pärt’s 80th birthday ECM has released a double album:

Manfred Eicher has put together a selection of recordings from the last 30 years. This allows an easy introduction to the sound world of Pärt. Yet even for Pärt enthusiasts, Eicher’s skilful dramaturgical arrangement offers a new experience.

The booklet to the CD features a personal introduction by Manfred Eicher, in which he comments on his collaboration with Arvo Pärt.